How long you live determines how much money you need

No-one can predict how long they will live but we all want our savings to last the distance in retirement. Fortunately there are simple tools which can help us estimate realistic life expectancy, which means we have a better chance of effectively planning for our retirement.

The Australian Bureau of Statistics (ABS) life tables are a commonly used measure of life expectancy, although they are based on historical data only and don't take into account improvements in mortality resulting from things like healthier diets and medical advances.

According to the 2010-2012 life tables, a 65-year old man has a life expectancy of around 19 years, and a female of the same age, 22 years. However, there are problems with using these tables to determine your life expectancy; the data is a snapshot in time and they do not take into account the fact that we are living longer due to improvements in mortality.

It is possible to factor in mortality improvements for a more realistic measure. Chart 1, below, includes Australian Intergenerational Report mortality assumptions1 and demonstrates that the average life expectancy is longer than the Life Tables estimate, i.e. 50% of men aged 65 in 2012 are expected to live to almost 88, compared to 84 as set out in the Life Tables. This is shown by the green line in Chart 1. 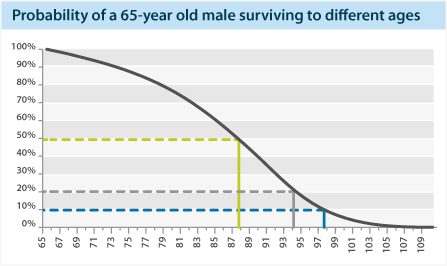 It is important to remember that while a more realistic measure, the median still represents the middle result for a group of people the same age and gender. Half will live longer than expected and half will not. If using the average life expectancy, it could mean that only half of these people's retirement plans will succeed.

Preparing for an uncertain lifespan

Living longer than expected is a gift but also a source of risk, which necessitates the saving of more capital to give greater confidence that your money will last the distance. Using average investment returns2, a 65-year old male in 2012 would need $685,000 for his savings to last to age 97. Conversely, if this 65-year old male 'planned' to live only to life expectancy (87 for a 65-year old man, according to Chart 1), he would only need $440,000.

The length of time you want to plan for will determine your required balance of retirement savings. Having enough money to give 100% certainty that it will last for life may mean that you leave a substantial estate behind. However, by planning just for your estimated life expectancy, you take on the risk that you will live longer, which might mean that you spend several years of retirement surviving on the more modest Age Pension. This is 'longevity risk'.

Speak to your financial adviser or contact Challenger Investor Services on 13 35 66.

. Assumptions: Investment returns of 7 per cent every year with expenditure of $40,407 per annum increasing at a rate of 2.5 per cent per annum to account for inflation.