Retired Australians want financial security and peace of mind but feel locked into ‘gambling’ their life savings on sharemarket-dominated superannuation.
That is a key finding of research launched today by "National Seniors Australia" Feeling financially comfortable? What retirees say, pointing to a failure of the superannuation system to help retirees safely convert their savings into reliable income that will last for life.

The research revealed a clear conflict between stated risk appetite and revealed investment behaviour, with more than 25% of retirees who claim they can’t tolerate a loss of more than 5% investing all their retirement savings in the sharemarket, with another 43% investing some of their savings.

National Seniors CEO, Professor John McCallum said these findings revealed the conflict experienced by many retirees, particularly post-GFC, who felt they had little option but to continue to ‘gamble’ with their savings in the sharemarket, despite having a low tolerance for risk.

“When members reach retirement, the risk of managing their superannuation savings shifts from the super fund trustee to the retiree who may have little experience with this,” Professor McCallum said.

“It is both a clear opportunity and a responsibility for the superannuation sector and government to reset the regulatory and product focus of superannuation to better meet the needs of Australian retirees.”

The study found those who had secure income for life, such as those with defined benefit pensions, had higher levels of financial comfort than those with market-linked retirement savings. Previous National Seniors research found 84% of respondents said regular and constant income in retirement was very important to them.*

Retirees with secure sources of income placed a high value on the security, comfort and confidence that came from having a regular pay cheque in retirement, knowing their expenses were covered and they could enjoy the retirement they had worked hard for.

Challenger’s Chairman of Retirement Income, Jeremy Cooper said the findings support the urgency of developing the retirement phase of Australia’s superannuation system to improve the quality of life for retirees.

“Our system is doing a good job of helping Australians save for retirement but the job remains unfinished. It’s time to shift the focus from accumulation to addressing the unique challenges faced by retirees who want access to secure income that lasts for life,” Mr Cooper said.

The report found investment comfort levels were relative to personal values and social groups, and were not simply defined by a dollar figure.

“Having more savings or assets does not necessarily translate into feeling more financially comfortable, and those with relatively less do not always consider themselves to be worse off,” Professor McCallum said.

“Retirees feel vulnerable to market volatility and the uncertainty that comes from a longer life expectancy. It’s time to re-focus and move from consultation to action that addresses consumer needs and improves the comfort and confidence of retirees.”

More than half of retirees are worried about outliving their savings

The research found that more than half of retirees are worried about outliving their savings, with women more than 40% more likely to worry than men.

Retirees who had combined the age pension with other income sources also reported a greater sense of financial security, as did those who had actively planned for retirement. This suggests that higher levels of financial literacy can lead to more positive outcomes for retirees.

The latest National Seniors Australia report Feeling Financially Comfortable? - What Retirees Say looks at the comfort levels of retirees both with and without a secure income and seeks to understand how different financial situations in retirement affect a retiree’s sense of comfort.

The full report is available at https://nationalseniors.com.au.

A leading independent advocacy group for people aged over 60, National Seniors Australia has about 130,000 members across the country. It represents the views of older Australians to all levels of government to ensure a fair go on issues of age discrimination, mature-age employment, retirement income, health care, aged care and the cost of living.

The full report is available here. 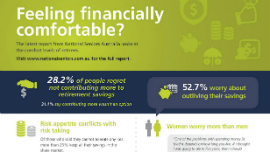